Part II: The Adventures of Betty, Roxie, and The Rockwood: Wall, South Dakota

Trip planning is tedious work.  You try to balance a long day of driving with a short day. You try to offset a full day of site seeing with a leisure day. (I should confess that I have never fully mastered that one!  Anyone traveling with me knows that struggle is real!)  By the time we reached Wall, South Dakota we had traveled nearly 650 miles and we were ready for a slower pace.

We checked into Arrow Campground, unhitched, and set up. Even though we opted for an early dinner, we were still operating on Central Time, it did not feel so early to us newly transplanted Mountain Time zone vacationers. We had hoped to reach Ben Reifel Visitor Center before it closed for the evening to get our National Park Passports stamped but the campground host, Connie, told us the national park was not in summer hours just yet (those started in two days time) and we had missed their off season hours.  To ease our look of disappointment, she informed us she was a Park Ranger at Badlands and she would be happy to mail us our stamps. She also gave us suggestions for activities and hikes we would want to see. 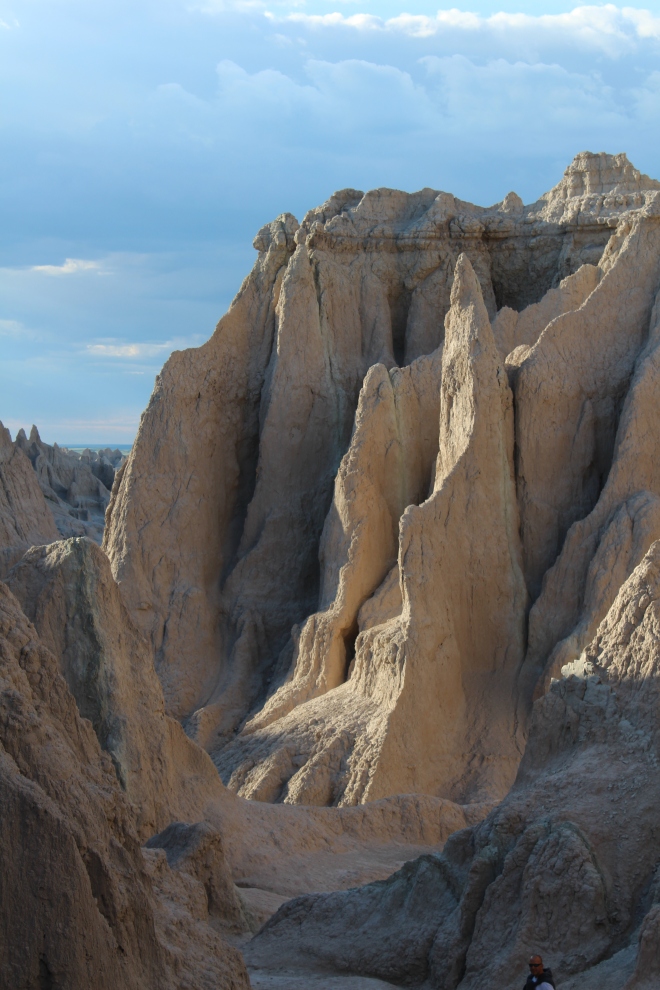 We entered the park through the Northeast Entrance and found ourselves gazing at the beauty of the odd rock formations in no time. We were excited and ready to stretch our legs so we set off on the Notch Trail. The Notch Trail is a 1.5 mile round trip trail that takes up to 2 hours. The trail climbs a log ladder and follows a ledge to “The Notch” for a a beautiful view of the White River Valley. The trail is not for the faint of heart or those with aversions to heights. After talking to everyone in the group, I quickly decided I was the one person who would struggle with this hike the most and I was determined to put aside my fears and do it. Connie, being the diligent Park Ranger even after hours, did inform me that if I got up the ladder and could not get down, helicopters would be called to come and get me and I would be billed for it. 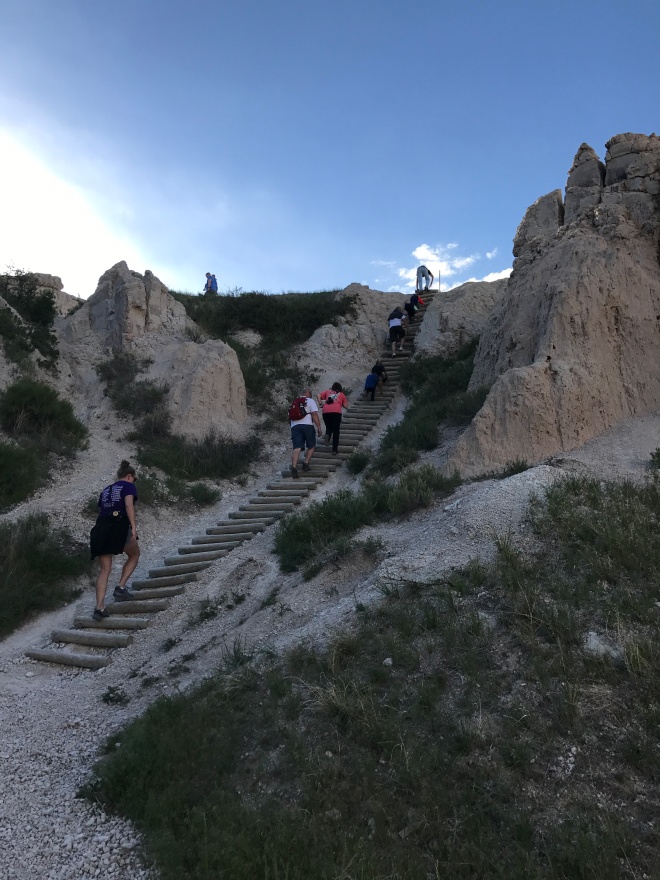 That log ladder came faster on the trail than I was prepared for. I read that the ladder gets wobbly if it has too many people on it at one time, so we went up one at a time. I took the anchor position so I would not hold anyone up and I could have my freak out moment all to myself.  We all made it up, and later made it down, as safe as we could. The hiking above the ladder was a little step at times. There isn’t really a path marked other than a long white marker stretched here and there to keep you going in the general direction. Finally we reached an area that we concluded was The Notch because after that point was a significant sheer drop and stretched out before us was a view that no photo can ever do justice.

Feeling accomplished, we wandered back to the trucks. We did two additional hikes that night; Cliff Shelf was a short half mile loop Connie had suggested we might see animals at and then Fossil Exhibit Trail that featured fossil replicas and exhibits of extinct animals that use to roam the Badlands.  We also drove the scenic Badlands Loop Road. Every turn of the road brought a new site for us to awe over. At one point it felt like the Badlands went from growing up to the sky to something sunk into the ground. Daylight quickly ran out and we found ourselves watching the rock formations turn from white to stripes of pink to dark. 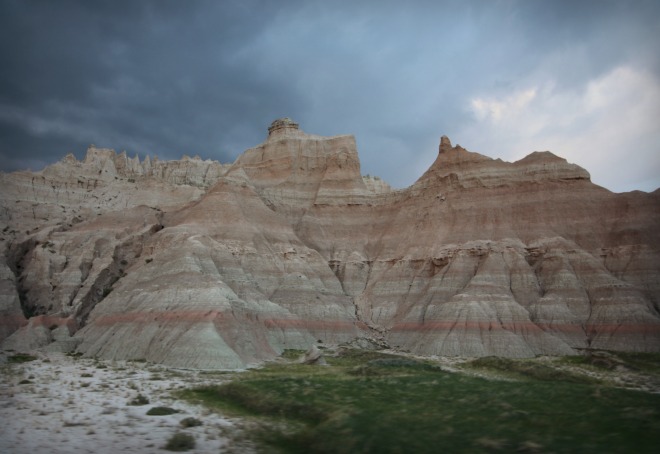 As the sun set on this beautiful place, the temperatures dropped and we watched a storm begin to move in. We exited the park through the Pinnacles Entrance and found ourselves back in Wall in less than 10 miles. Sleep came easy that night and I don’t think I was the only one dreaming about the wild west and all those who have attempted to tame a part of it.

The moment we left Onawa, Iowa the day before we started seeing billboards for Wall Drug Store. If we had not been planning to stop there anyway, the power of advertising would have pulled us in.  The lure of 5 cent coffee, free ice water, homemade donuts, panning for gold, seeing a T-Rex, visiting the leather store, or riding a giant jackalope called to us even if we did not know it. Funny enough, I found a story about Ted Hustead, the founder of Wall Drug, who talked about how free ice water and a few 12×36 signs on I-90  made Wall Drug what it is today. Ted and his wife put a three year limit to turn a profit on the struggling drug store in the middle of no where. His wife was the first to suggest that travelers across the hot prairie would like ice water. So, Ted made some signs and put them up and the people came and have not stopped coming.

What can you actually say about this store that has not already been said before? It is huge. It is odd. There are so many things going on that it can be overwhelming. Yet, it can be silly and fun at the same time. We walked through the doors as a group and quickly got separated as we each were lured away by our varied interest. The kids found the toy store, I went to search out allergy medicine, my son got lost in the leather store, Wayne went to the camping store, and Allen got lost looking at the historical photos hanging on the wall.  We would bump into each other in a random part of the store and then lose each other all over again. It was fun and a great way to start the third day of vacation and we left Wall, South Dakota feeling good! 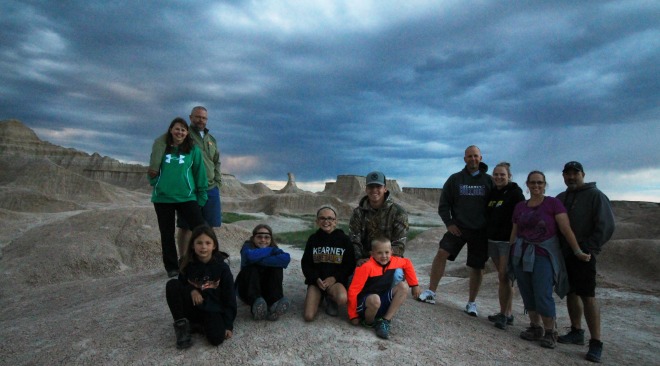