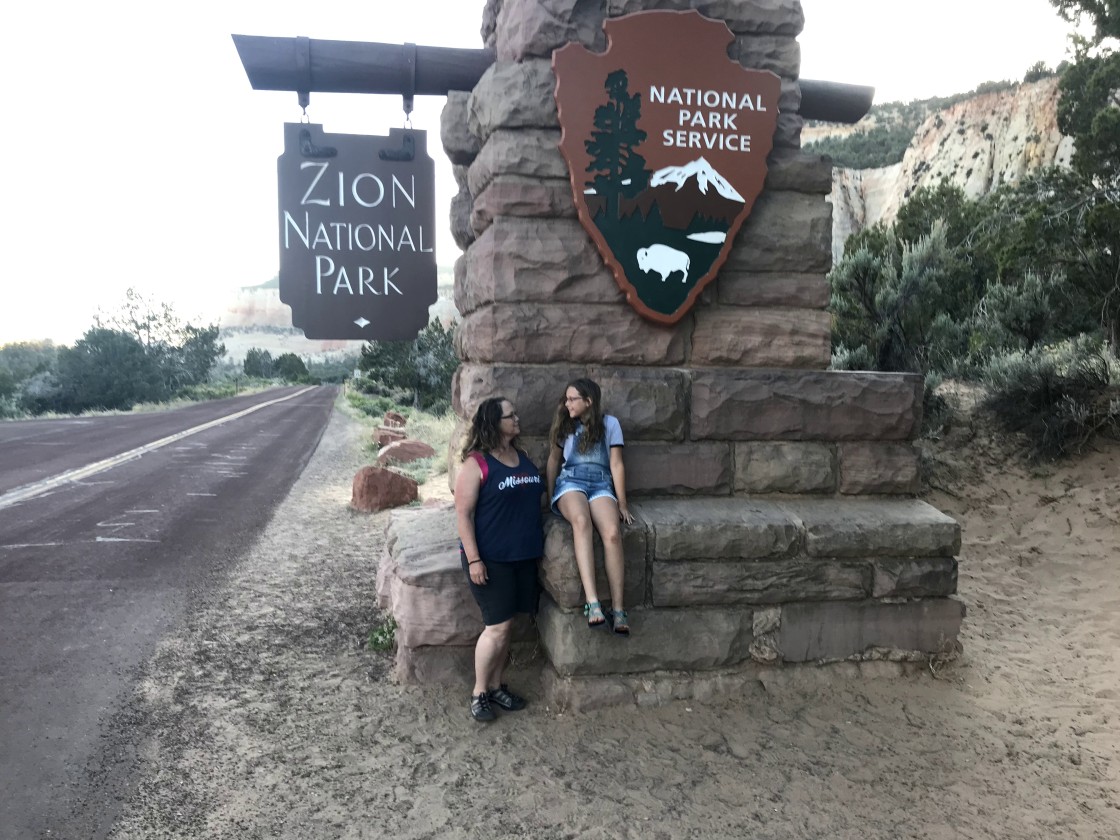 I started falling in love with Zion National Park through the website Pinterest. I found myself with a pinboard titled “Dream Locations” that I would post random photos of dreamy places I would some day like to visit. Little did my conscious mind realize but the majority of the places I had pinned were all of Zion National Park. The beginning of a romantic relationship had started. I was lusting after red rocks, green trees, and the cool water that had created and defined this small piece of heaven on earth.

I started sharing my research with my husband. We added names to our vocabulary that never existed before: Angels Landing, The Narrows, and Walter’s Wiggle. We spoke of these places like they held meaning to us. The more research we conducted I found my infatuation deepening. These places crept into our dreams and our dinner conversations. We pondered if we stood at their base could we, would be be able to do them justice?

It was like puppy love. We had a heightened awareness to Zion National Park. Every photo, every scene on television or the movies, an advertisement in a magazine would cause us to gush and swoon. To say we were attracted was an understatement!

Our contemplation turned to commitment. We shared our new love with Roxi’s owners (Meeghan and Jeremy) and soon we were planning a three camper trip to Zion National Park.

We departed Kansas City on May 31, 2018 heading out for a seventeen (17!!!) day road trip. Before we arrived at Zion, we had already visited Great Sand Dunes NP, Mesa Verde NP, Four Corners Monument, Lake Powell National Recreational Area, and the North Rim of the Grand Canyon.

We arrived at Mt. Carmel RV and Motel on June 8, 2018. We spent three nights and used this park as our base camp for visiting Zion NP and Bryce Canyon NP. We had a 17 mile drive into Zion and a hour drive to Bryce Canyon NP.

As soon as we arrived and settled, we were off to Zion. We could not wait to get that first site, that first taste of this place that had created such a wanderlust within us. 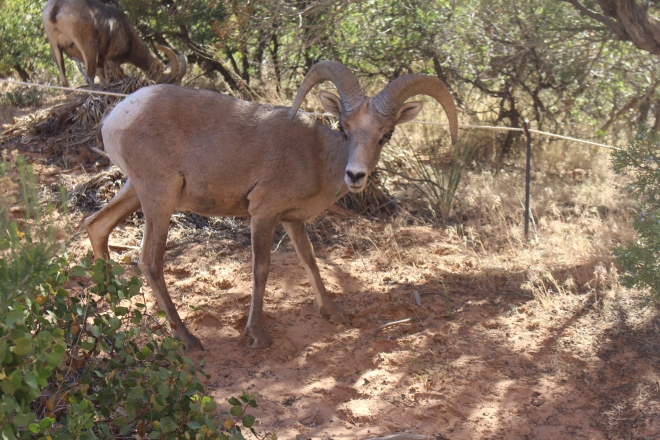 We arrived late afternoon, greeted by a herd of big horned sheep out looking for dinner. As we wound our way down to the valley floor we kept seeing this large mountain with arches etched into it. It was so red in contrast to the green tree tops it towered over. We made our way through the Zion-Mt Carmel tunnel with awe. Built in the 1920, the tunnel, which is over 1 mile long, is narrow. It was made when vehicles were just smaller. Thankfully the tunnel was only allowing one way traffic which really helped me feel better about taking our large Ram through the tunnel.

Prior to arriving to Zion, the one negative thing we were aware of and prepared for was the crowds. Zion uses a shuttle service to take guest through the park to minimize the congestion. We knew that long waits to get on a shuttle were possible. So we arrived early armed with full water bottles and an extra shot of patience.

Our first stop was The Grotto. Our morning goal was to hike Walter’s Wiggle. Walter’s Wiggle is a trail comprised of 20 very tight switchbacks that leads hikers to the entrance to Angel’s Landing, a place called Scout Lookout. The entire hike to Angel’s landing is 5.4 miles roundtrip with an elevation change of nearly 1,500 feet and is estimated to take 4 hours. The trip to Scout Landing is 4.2 miles round trip.

We had only planned to hike Walters Wiggle but as we encountered other hikers we kept being asking, “You going all the way to Angel’s Landing?” This question became like some sort of test or challenge: Are you strong enough? Are you brave enough? Do you have enough determination and grit to make it to the top? 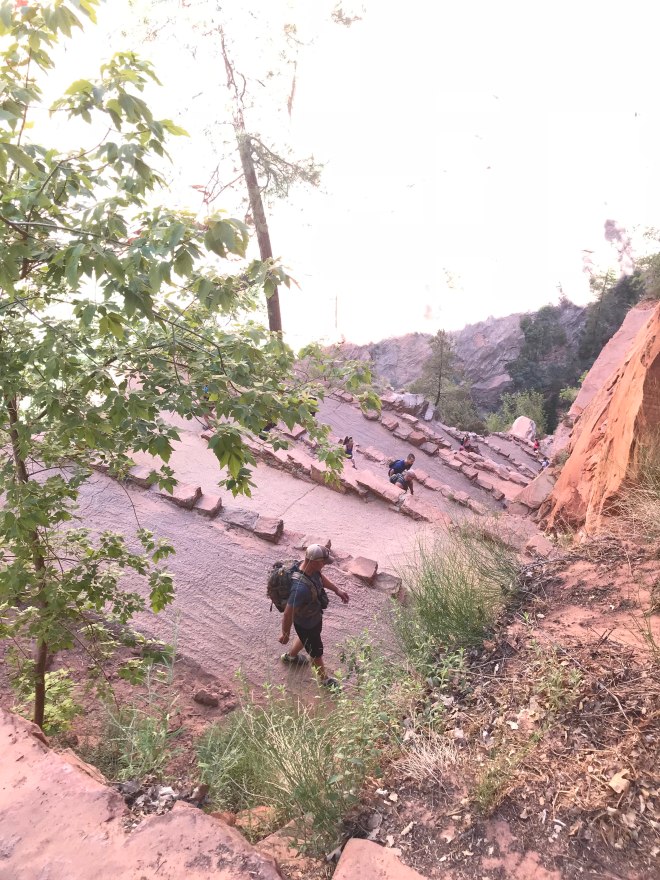 Being an overweight, out of shape person, who is more than slightly afraid of heights, I was just going to be proud of myself for making it up Walter’s Wiggle to Scout Landing. But as I hiked, these questions kept running through my head. They were all I could think about as I struggled to find my own breath during the hike. 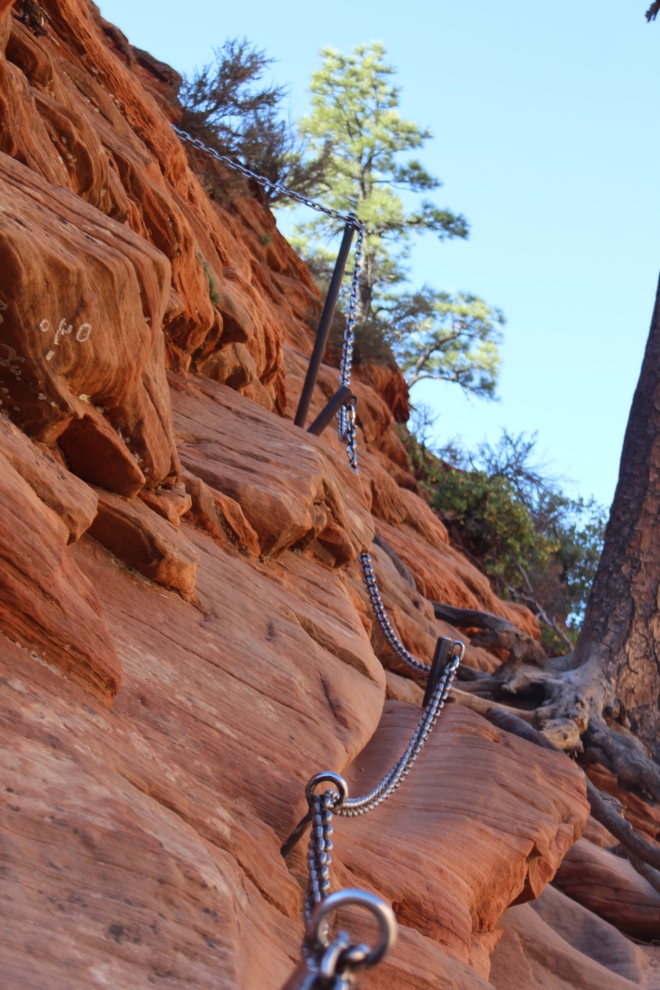 Once we landed at Scout Landing, we took a moment to rest. We were happy to find vault toilets at the top as a spacious area to rest in. The sign announcing the start of Angel’s Landing stared at us the entire rest period. There were 8 of us that day on Scout Landing. Eight of us who had successfully hiked Walter’s Wiggle who could turn around and call it a good day. But we asked the question of ourselves that everyone else asked us, “So, are we going to keep going?”

From Scout Landing to the summit of Angel’s Landing is .6 of a mile but in that short distance you encounter narrow passages, steep inclines and declines, crowded hiking conditions, and very rugged terrain. In the end, five us of, myself included, committed to trying it.

Within minutes of starting Angel’s Landing, when the first iron chain hold stops, my dear husband tapped out and turned around. He took our shared water with him. We were down to four. And maybe I should describe the four: the youngest was an 8 year old little boy (Tucker) with a lot of spunk. The oldest was that little boy’s 66 year old grandfather (Gary) who had recovered from knee replacement surgery the year prior to this moment. There was also that little boys father (Jeremy) , who is fit as a fiddle, and myself.

That one mile round trip hike was the hardest thing I have done in my life. It challenged me mentally (fear of heights) and it challenged me physically. Gary hiked right behind me. He kept giving me permission to turn around, then in his next breath would support our next step. He offered me water when I had none. Each step of that hike looked scarier than the last step. But before we knew it, all four of us were arriving at the top of Angel’s Landing.

We sat near a rock at the top and just collected our thoughts. We took a moment to let that accomplishment sink in. My fear of heights was crazy as I sat there. I was convinced the wind was going to cause me to lose my balance, trip. and roll to my death. I did not trust my knees or my legs. And it shows in every photo taken of me that day.  But I will say this, I have photos to prove that I was at the top of Angel’s Landing. And somewhere deep inside me, I had connected to some inner strength. 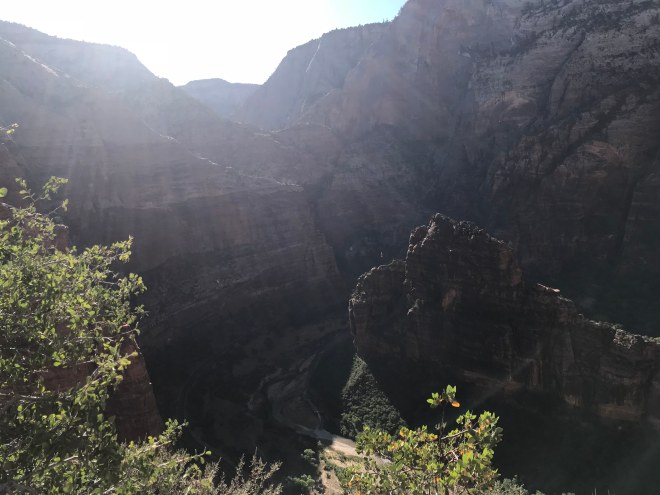 We made our way down, which is just as challenging as the ascent. I trusted my knees and legs to get me up but I seriously questioned them failing me on the way down. But they did not. We maneuvered the crowds, which maybe the trickiest part. When we arrived at the place that my husband left us on, him and the other three greeted each of us with cheers, hugs, high fives, and more water! We were warriors who had returned from battle. 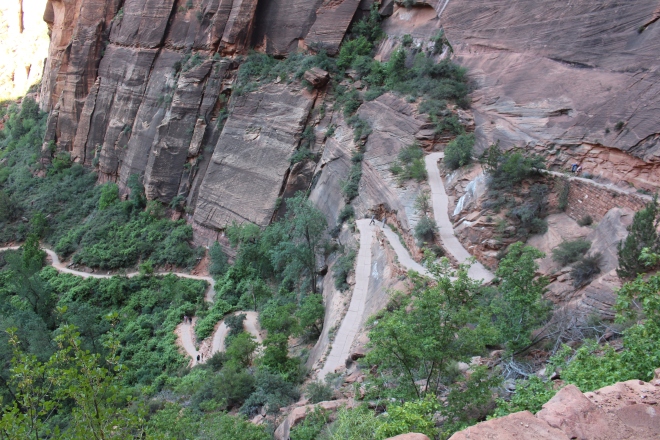 By the time we were descending Walter’s Wiggle it was starting to get hot. It was also nearing lunch time and we needed to refuel. A short shuttle ride back to the visitor center and we were at our trucks, pulling lunch coolers out, and finding a shady tree to rest under. 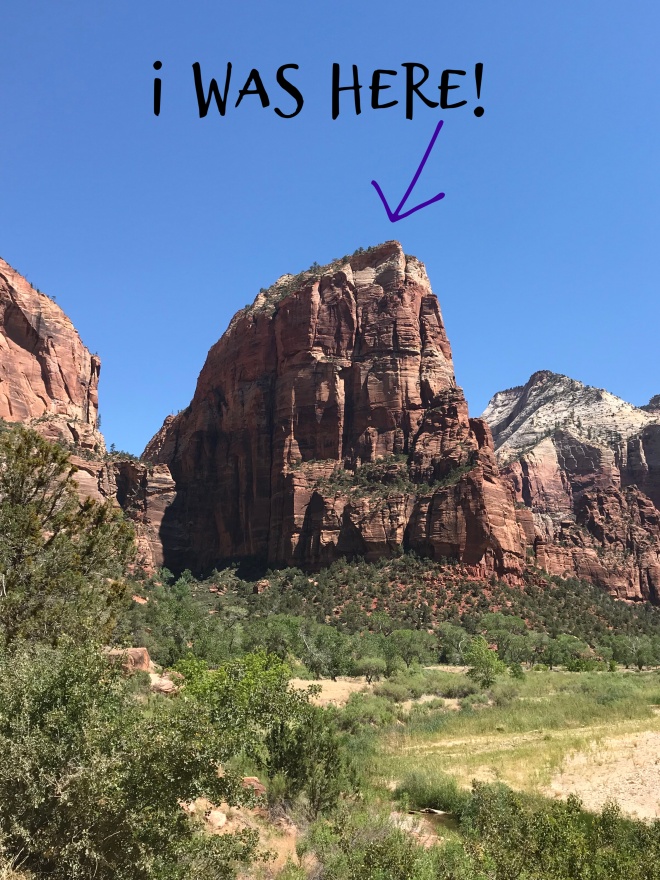 After lunch we took the shuttle to the end of the line,  the Temple of Sinawava to hike the other bucket list hike at Zion, The Narrows. The Narrows is a slot canyon that the Virgin River flows through. The depth of the river varies from ankle depth to waist depth. At certain times of the year, there is a risk of flash flooding that makes the Narrows very dangerous. 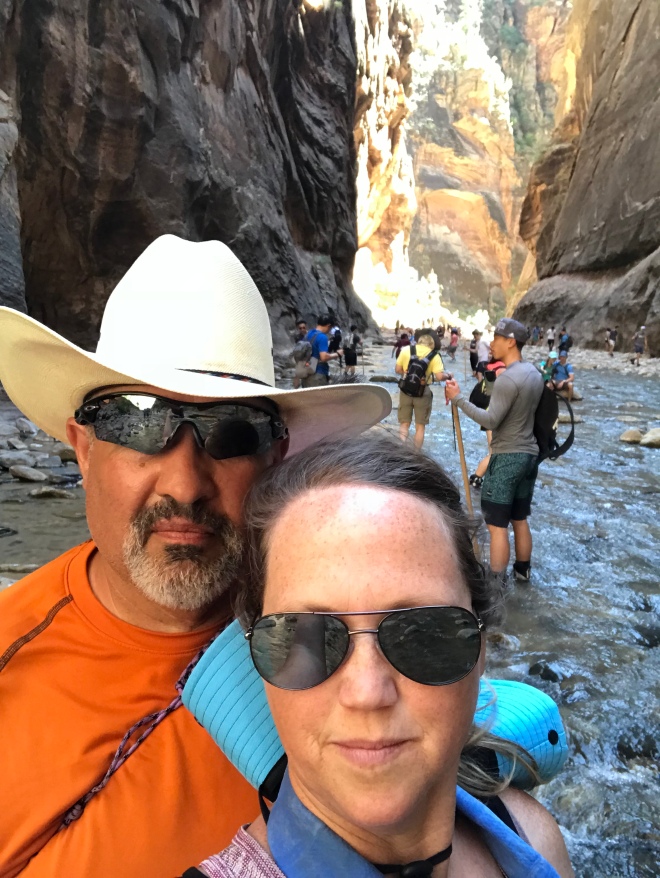 The entire Narrows hike is 9.4 miles from the trailhead, which is by the shuttle stop. After lunch I was pretty pumped for this hike, and I was so hot, I was ready to be walking in the cool water.

We also anticipated crowds on this hike, and we were not wrong. It was very crowded.  I had heard that the crowds thinned after the first mile (after entering the water) so it was my goal to get beyond that point and just enjoy the environment.

The three children with us, were so happy to be playing in water. The five adults experienced a large learning curve in how to maneuver the slippery rocks and the cold rushing water. Prior to leaving for this trip, I purchased neoprene socks from Amazon and I found they provided a layer of protection against the cold water. We also had walking sticks that helped steady ourselves as we stepped carefully. 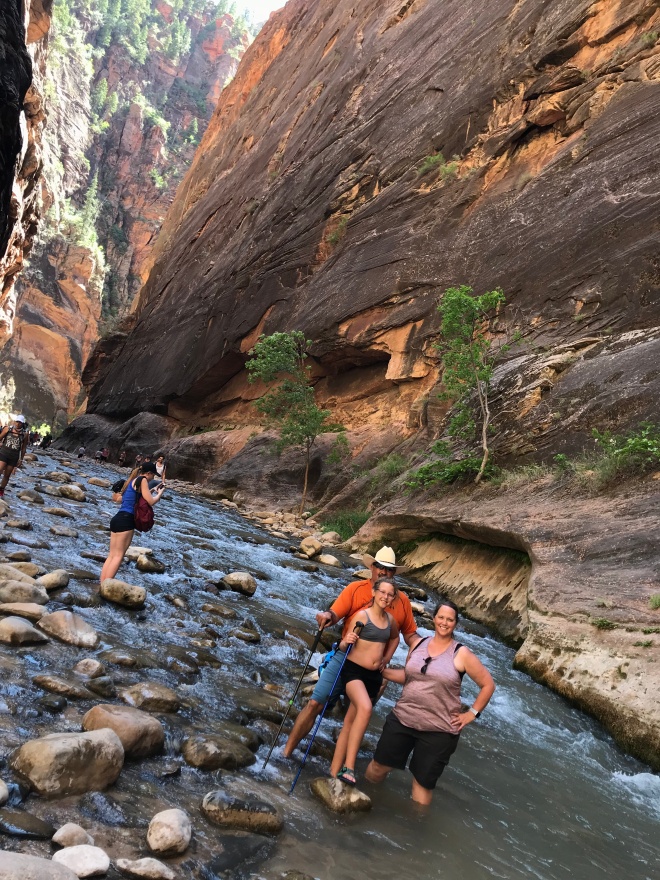 I knew I was exhausted. Every step was a chore. But I was also convinced to make it past the mile marker. At one point we found a bend and the kids enjoyed splashing. Meeghan and Jeremy decided to stop here and stay with the kids. Wayne and I sat about to keep walking. We took about 20 steps and I just stopped. My body hit the wall and just could not go any further. We had not even gotten a half mile into The Narrows. 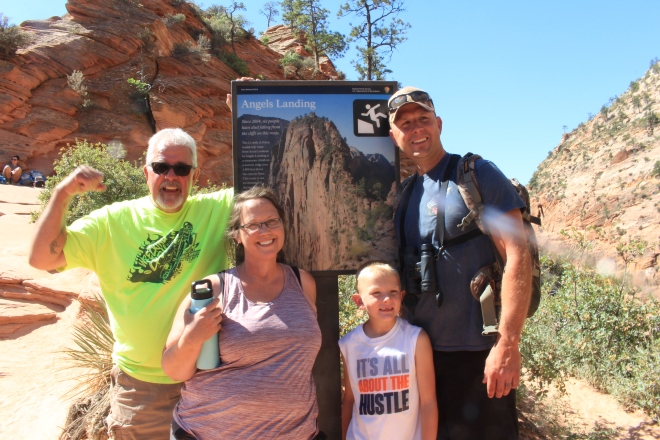 We only spent 1 1/2 days at Zion. Ideally I would have like longer. We opted to not return on our last day in the area because we wanted to explore Bryce Canyon NP. In hindsight I would advise anyone going not to do The Narrows and Angel’s Landing in the same day.

Every great love story starts with a physical attraction. That pinboard on Pinterest is where my attraction to Zion NP started. Lust can grow into something deeper first attraction and hopefully become an attachment. I can say I am forever attached to Zion National Park. The park and it’s amazing hikes challenged me to a point I don’t let myself experience. I can honestly say I gave my all to that park and in return I was rewarded with amazing views, incredible experiences, and a changed view of my self.