The Adventures of Betty and Roxie: A Desert Vacation

It all started with a photo on Pinterest of Zion National Park. It morphed into an epic seventeen day road trip that would cross four states, make eight stops, travel three thousand mile road trip. We were nervous about visiting the desert in the summer, so we went early in the summer. We were excited to see so many national parks and places we had been visiting on Pinterest for years; Monument Valley, Four Corners, Mesa Verde, Zion, The Grand Canyon. I was nervous because it was a lot of moving, a lot of exploring, and even though it did not seem like it, a lot of editing.

Betty and Roxie, as you may recall, went on another grand adventure together to Wyoming in 2017. Our friends the Rockwood’s decided to decline this adventure because they were saving up days for a 2019 adventure east to Gettysburg. Roxie’s owners invited their extended family to join us so Papa Gary signed up to be our third camper on the Desert Vacation.

We decided to meet at the Paxico Rest Stop just west of Topeka at Mile Marker 336 on I-70 as we were all coming from different places. Together we continued traveling west. We had no reservation for this first day, but landing where we could. We wanted to push ourselves to get a full six hours in so we could make the driving on Day 2 as comfortable as possible.

We ended up making it  six and half hours the first day and landed in Seibert, Colorado, approximately 50 miles west of the Kansas/Colorado border. We checked into Shady Grove campground.

Meeghan and I had researched every campground from Wakeeney Kansas to Colorado Springs as part of preparation for this trip. We had “hoped” to reach Shady Grove because it had a wonderful pool and thought it would be a treat to the kids after a long first day of traveling. Well, sadly the lady who checked us in told us there was no pool at Shady Grove. Meeghan and I jumped on our phones and realized we made an error in planning: the Shady Grove Campground in Seibert Colorado does not have a pool but Sandy Grove Campground in Pennsylvania has a pool (and a nice website that we apparently looked at instead of the one in Colorado)!. So lesson learned, when researching on the internet make sure you are in the correct state.

We secured three camping spots for the night and settled in. We pre-planned for a quick dinner of BLT sandwiches and made ahead side salads then we set out walking the small town of Seibert. As we walked around town, we speculated about living in such a small out-of-the-way place. We found a city park where the kids could burn some pent up energy. Meeghan’s youngest decided to jump off the slide and literally caught himself by the throat and gave himself a clothes-line injury. Poor little man spent the rest of the vacation with a massive friction mark on his neck!

Shady Acres had a variety of tenants. Some bikers on their way west tent camping, a girl camper on an adventure, and a few others stopping for the night. It was comfortable and quiet. 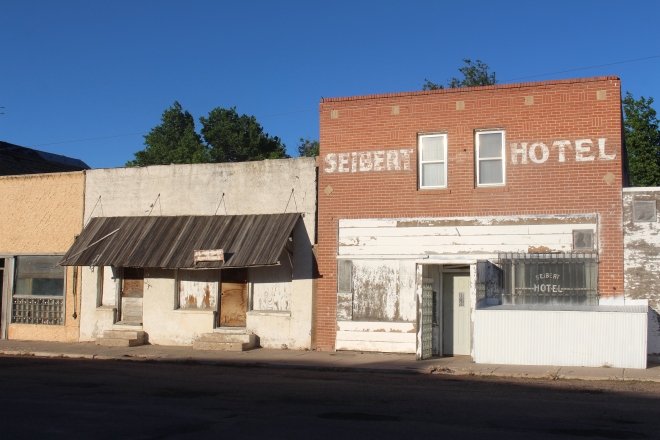 The next morning we left Shady Grove and Seibert to head towards Colorado Springs. Our goal for Day 2 was to reach Base Camp Family Campground in Alamosa, Colorado.  Before we reached Alamosa, we stopped for a road side lunch just past Colorado Springs and met up with Meeghan’s sister, her husband, and their baby. They joined us for part of our Colorado visit.

Our newly expanded group continued south on I-25 turning west once again on Highway 160. The drive from Walsenburg to Alamosa was scenic and wonderful. We checked into Base Camp late in the afternoon ready for some adventure and exploring…..