As an adult I developed a love/hate relationship with Labor Day Weekend. I loved the long weekend. I loved the extra paid day off from work. I hated that it symbolized the end of summer. I hated the realization that soon the days became shorter and the temperatures would start dropping. I even hated that the pools closed. However, as a camper, I don’t so much hate Labor Day Weekend any longer. Many of our favorite camping trips occur in the fall. So, instead of seeing it as the end of summer, I see it as a transition from summer camping to fall camping.

We selected to spend Labor Day at Thousand Hills State Park in Kirksville MO. This was a new state park for us, it was within the 3 hour radius limit we set, and there is a lake to play in. Our friends Mike and Marnie were already booked to be there and they offered no loud objection to the Master’s and Taylor’s joining them.

We left Kansas City late, late afternoon with plans to stop along the way to eat dinner.  Wayne took a new job and his early release Friday’s went away so we had to wait for him to fight traffic to get home. The restaurant we selected was in Hamilton MO and while it had ample parking for the trucks and campers all their wait staff had returned to college leaving the small restaurant  running very slowly. The slow service allowed the Taylor’s to meet up with the Master’s for the remainder of the journey.

As we approached Kirksville, our GPS directed us in. We found ourselves on a dark, gravel road. The map app showed we were by the lake but we were no where near the campground. The map showed us that we were on the backside of a giant loop road and that we should theoretically  be able to follow it around and find the campground. After many jokes about Keith Morris narrating our final trip, we contacted Mike and he lead us to the campground. Ironically, his GPS did the same thing to him the day before only he was not driving down the gravel road at night.  This is the second Missouri State Park that we know of where the GPS is not connected to the state park.

We arrived at dusk. By the time we  filled up with water, we found ourselves backing into a shared site at night. Backing up and parking by flashlight is no joke. Getting in your camper after you have traveled down a bumpy gravel road to find that you have lost all power to your first slide, is also no joke. Unfortunately, we experienced both.

We booked site 39, which is a family site. This was our second experience with a family site and the Master’s first. The site is wider than a regular site (in fact it is double the width of a regular site because it is virtually two put together). A family site comes with two of everything; two electrical boxes and two picnic tables and a much larger side yard. Family sites may work great for tent campers or even smaller units but they are pretty tight when you have two 32 foot campers with a combined total of five slides.

There are two campgrounds at Thousand Hills State Park. We were in campground 1 but we did visit campground 2. I think there are decent spots at both. Campground 2 appeared to be the smaller of the two.

Thousand Hills State Park is one of two state parks with petroglyphs or Native American rock carvings still visible in the park. The petroglyphs are inside the Interpretative Center just off of the swimming beach. We had a great time stretching our imagination to see the carvings, and then to decide what they meant. It was sad to see so much graffiti. People had carved their initials over the carvings. I would like to think that is the reason for the interpretive center  was built but given it was completely unsupervised I am not sure.

We encountered a lot of people hiking at Thousand Hills. From short .6 mile hikes to long 10 mile hikes, from day trips to overnight trips there seems to be a trail for everyone.  We hiked portions of the underdeveloped Forest Lake Trail.

If hiking is not your thing, or it is your thing and you feel the need to cool off after a hike, you can head to the swimming beach. The kids enjoyed the beach. We enjoyed the beach. Until that moment when the unsupervised child starts throwing rocks at your kids. And while the unsupervised child’s parents never see him throwing the rocks at your kids they sure see you asking him to stop throwing the rocks and they get all mad at you for addressing their child.  Swim at your own risk. 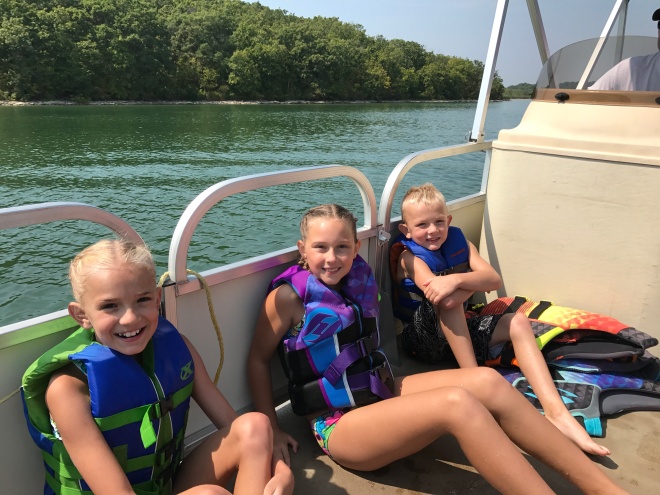 The marina rents boats. We rented a TriToon boat for an entire afternoon. We had looked forward to spending our time anchored up in a cove but we learned that you are only allowed to anchor at designated swimming docks. There are four docks total on the lake and they were all busy as we approached. It felt very intrusive to join an group but we finally found a group who welcomed us to the dock and we anchored up. We spent the afternoon swimming, tubing, and just generally enjoying the lake.  For a holiday weekend, the lake was really empty. We  were able to do loops on the tube in the main channel with no worries of other boaters. 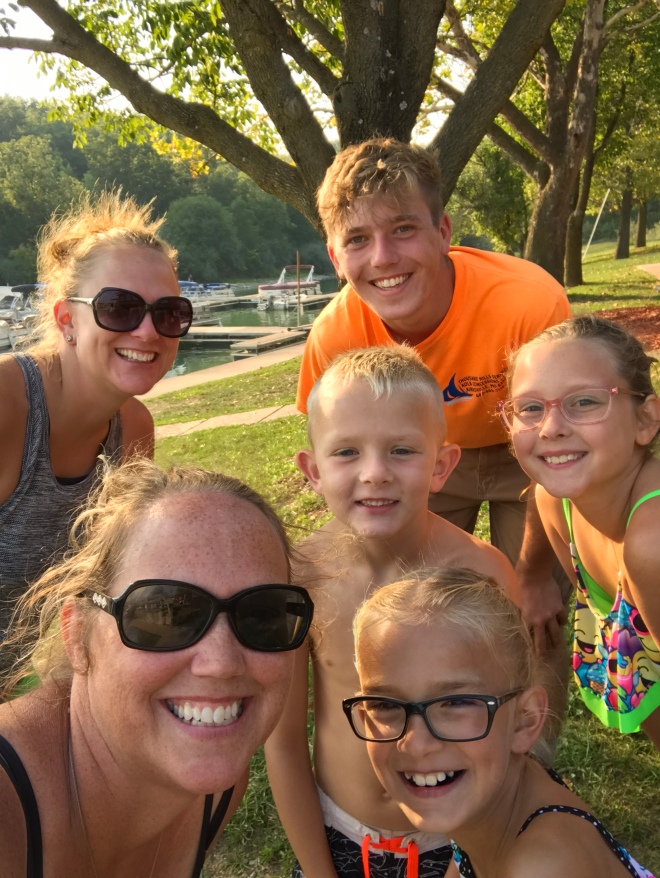 I should note that on this trip I faced one of my fears.  I have an absolute phobia of putting my face in water. I know it is ridiculous but it real to me. Panic attack real. Watching the kids and everyone have such a fun time, I decided to give it a go. I think it is so important for me to keep trying to tackle this phobia. I think it is so important to me for my daughter see me keep trying. I got on that tube. I got splashed in the face. And I had a great time. Meeghan and I shared the last adult beverage as a celebration of my accomplishment! 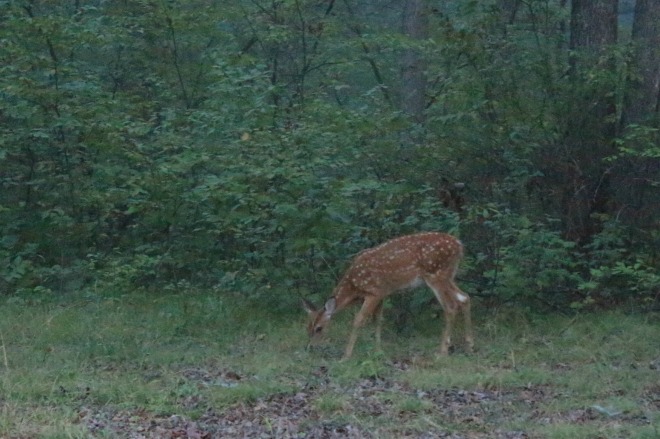 We enjoyed spending time animal watching. Wild turkeys and deer visited our campground and camp sites. Mike and I got up early and drove around the grand loop oohing over dozens of deer all over the place. Friday and early Saturday we were able to watch helicopters trim the trees from the power lines. The deer loved the fresh cut tree limbs. Have you ever seen a helicopter trim trees from power lines? Pretty amazing!

Of course, we also just enjoyed activities at our campsite. Meeghan made giant bubble wands and we threw together a solution for making large bubbles. The kids practiced and practiced to make giant bubbles. They also got a kick out of painting rocks and watching outdoor movies, from eating home made funnel cakes, and just from hanging out with friends.

On our last morning at the park, we attended a ranger lead program called Hug A Herp. What is a herp? We learned all about herptiles. There were even live examples. We noticed the day was foggy and the park ranger was the first to tell us how the fires in Canada were impacting our skies. I am not gonna lie to you all, we thought maybe the park ranger was a little off.  She ended up being right on.

We saw a lot of new types of snakes. Including a pug nosed snake. Mid morning we packed up and headed home. Our ride home was way less eventful than the ride there. After this trip, we had to put Betty in the shop to fix her lack of electricity to the slide. 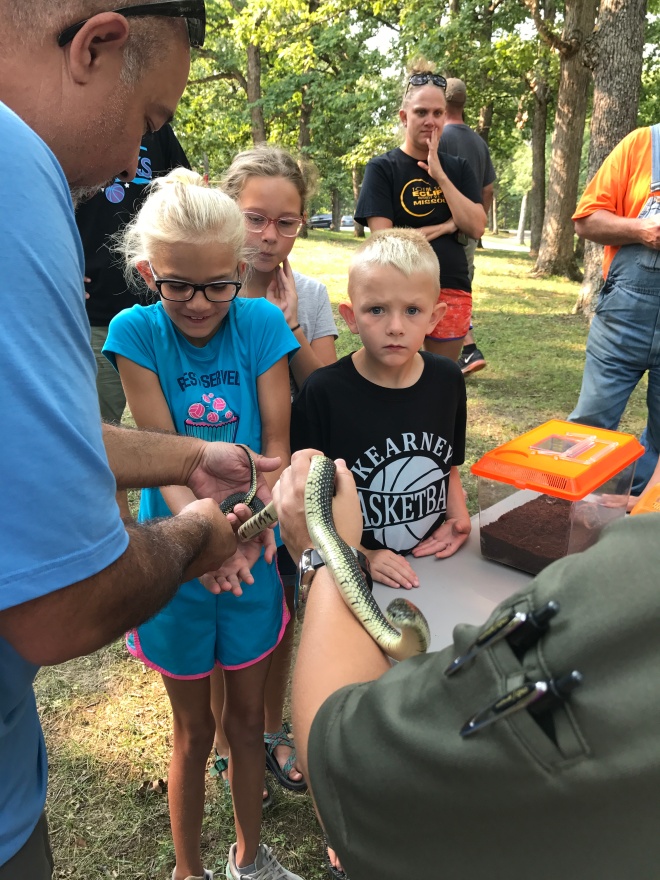 So, we bid summer farewell. It is not a time for sadness because we have the fall and I am pretty sure fall camping is my favorite. So long summer; see ya next time around!