If there is a place left in our country where the buffalo do roam and the deer and antelope play it is in the northeast corner of Yellowstone National Park in Lamar Valley.  If animal sightings are high on your Yellowstone bucket list then a visit to either Lamar Valley or Hayden Valley are a must.

The most controversial resident in these two areas is the wolf. Yellowstone re-introduced wolves in 1995 and currently there are eleven packs with an estimated count of 108 wolves living in Yellowstone and nearly 530 in the larger area.  A casual tourist driving through these areas is more likely to find a wolf enthusiast camped out along the road than they are a wolf in the fur.

In addition to the wolves, many other animals can be seen in these two areas. Pronghorns, elk, coyotes, big horned sheep, moose, bison, bald eagles, osprey, bears, and even badgers. Of course spotting these animals can take a keen eye or you can just follow your intuition. When you see a group of people pulled over looking off in the distance, you can stop and ask what they are looking at. You will find that not only are they eager to share their find with you but they are also likely to share their spotting scope as well.

Early Bird Gets The Worm

One morning during our visit to Yellowstone, we sat our alarms and took off as the sun was rising to make the long drive from Fishing Bridge to Lamar Valley. Our children were very grumpy and nearly at melt down stage before we even got started. Thankfully, our efforts were rewarded just a few miles from our campground when we spotted a large 400 + black bear running across the road. We were able to stop, pull off the road, and watch this animal cover a ground like he was Jack Be Nimble. There is nothing like seeing a giant black bear to push away the excitement and change a little persons attitude from grumpy to eager explorer.

We made a stop by The Petrified Tree as we had heard rumors from other visitors of Moose sightings in that area. We never saw a Moose so we headed off to Lamar Valley.  Shortly after we turned off the grand loop onto Highway 212, I noticed a new animal butt. Wayne thought it was a elk but I had seen my fair share of elk butt’s during this trip and this butt was definitely different. So, we pulled over and set about to explore. Again we were rewarded with a herd of Big Horn Sheep.

Our animal sightings continued; we found a badger, eagles, and even a momma elk teaching her newborn how to run. We sat and watched this new baby stumble, get up, run, stumble, get up, and run until they were no longer visible. The one animal we had hoped to see but never saw was the Moose.

Our activity goal in Lamar Valley was to hike to Trout Lake. We found the parking lot to be small and very crowded. The hike from the trail head to the lake is not a long one but has a very challenging vertical rise. We did make it to the lake and again we were rewarded with a beautiful view of mountain peaks reflecting on the lake. We were surprised to find fly fishermen fishing in Trout Lake. Wayne had researched in and thought the lake was off limits to fishing. We learned that only one small part of the lake, the outlet where the trout spawn, was off limits. 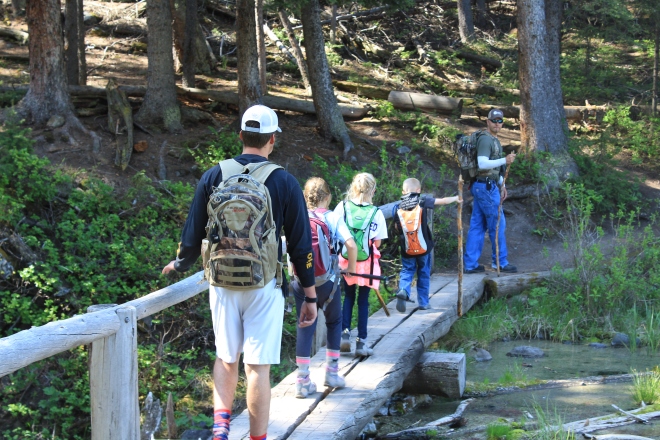 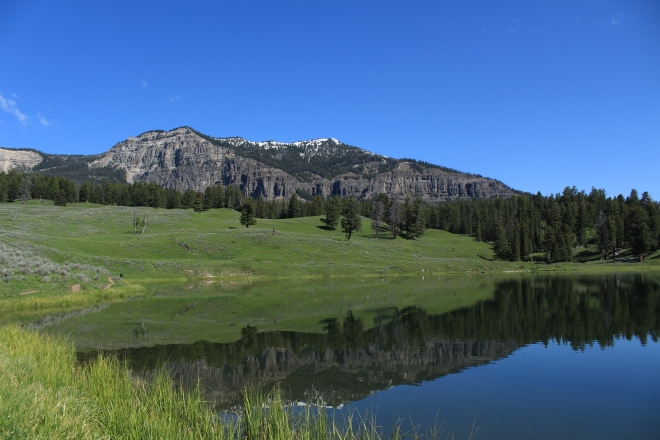 After a good hike and successful animal sightings we allowed ourselves a picnic lunch at the Yellowstone River Picnic area. A very friendly fox made his appearance during our lunch, which allowed us to have great conversations about the side effects of feeding wild animals with the kids.

People Love Sharing Their Passion; So Don’t Be Afraid to Strike Up a Conversation

The Todd’s loved Lamar Valley, in fact it was probably one of their favorite places in Yellowstone. They also had great animal sightings and were lucky enough to see the Moose near the Petrified Tree. The Todd’s learned that the visitors camped along the road are serious about their animal sighting and they are eager to share their passion with others.

Despite an early start to our day and despite the distance between our campground and Lamar Valley, we decided to return to Lamar Valley that evening in hopes of spotting a few more animals on our bucket list.

Off Highway 212, is a dirt road leading to Slough Creek. We traveled down that road and found a large group of wolf enthusiast camped out with powerful spotting scopes. We also learned they were watching a wolf den about 2 miles west of where we were standing. Waiting to see these animals is part of the game. These wolf enthusiast are prepared to wait Our little girls on the other hand find boredom really quickly.  In an attempt to distract, Wayne took the girls for a hike down to Slough Creek. Funny, on their hike, they disturbed a coyote who then walked right in front of the wolf enthusiast and they barely saw it. They were looking two miles past that ole coyote.

Our binoculars were not sufficient and we were thankful our host invited us to use their spotting scopes. Having poor eye site and needing corrective lenses I had little hope that I would be able to maneuver my glasses and the scope and be successful in seeing anything. Our host were so gracious and kept letting me try. I had probably tried three or four times and never saw a thing. I felt so inadequate because everyone else who looked through that scope got so excited. Not me. I could make out from where we were standing the den, or the general area but we were so far away and things just looked liked dots. Then, our host patiently offered me one more look and I was able to see the den and the wolf pups playing outside of it. I felt such a sense of mastery when I was able to figure out how to use that scope and got to see those pups (that looked just like dogs by the way).

As much as Allen wanted to see the wolves, I wanted to see a Moose. Rumors haunted me all day of a momma Moose and her baby being spotted along Soda Butte Creek north of Soda Butte Cone. We decided to part ways with the wolf enthusiast to go in search of a Moose. As we traveled Northeast on 212 every finger was crossed that we would be lucky. We kept hearing the momma and her baby lingered in the creek so I kept following the river. It went from wide and slow to narrow and rushing.

We finally turned a corner, the river changed again and we saw all the people lined up along the road. There was a Moose off in the distance eating. I think I slide out of the truck before Wayne even had it stopped. Before I could blink, Angie and the kids were right there. We sat and watched her for a long time and then without warning her baby emerged from the brush. A collective “awww” rose from the small crowd who had gathered. I was so excited I sat in utter amazement forgetting to take photographs! 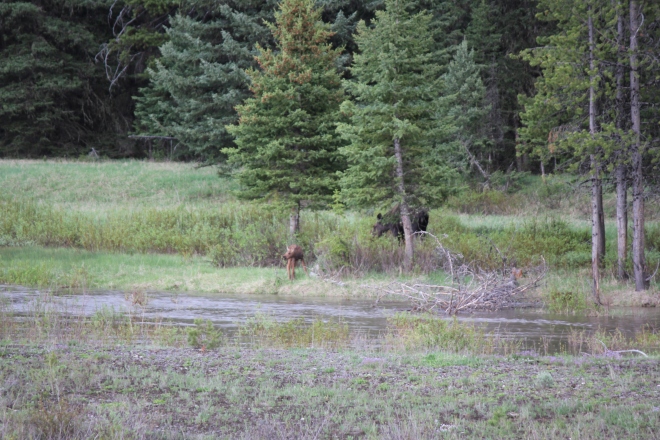 The Icing On The Cake Is So SWEET

We left Lamar Valley to head back to camp with our head and hearts happy. What a day! We started off with a bear, then big horned sheep, then a badger, an eagle, a fox, wolves, and finally a moose. My Yellowstone Vacation was officially complete. We decided to stop by Tower Falls. 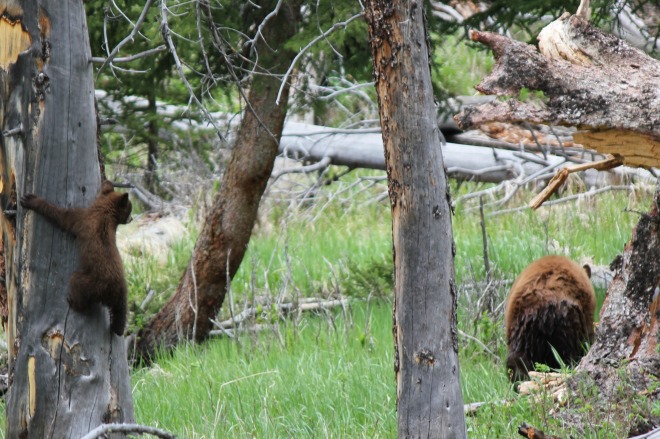 However, before we could get to Tower Falls, traffic stopped and began backing up. This is usually a really good indicator of an animal sighting. However, the only animal we could see was a bison, which are so plentiful you honestly stop stopping for them after your first day in the park. Before we could even process that this crowd was forming for a bison, we saw a momma bear and three cubs frolicking in the trees near the bison. The bison moved forward and spooked the bears and up the trees they scampered. No wonder all these people had stopped. The show was amazing. The bison eventually moved along (crossing the road right between The Todd’s and us) and the bears headed for higher ground. 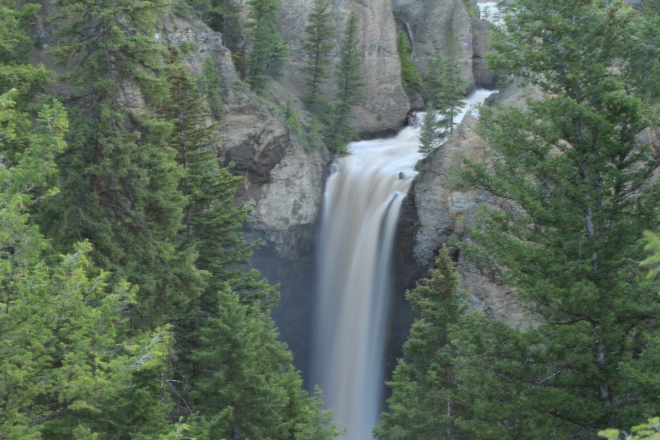 We ended our perfect day by stopping by Tower Falls.