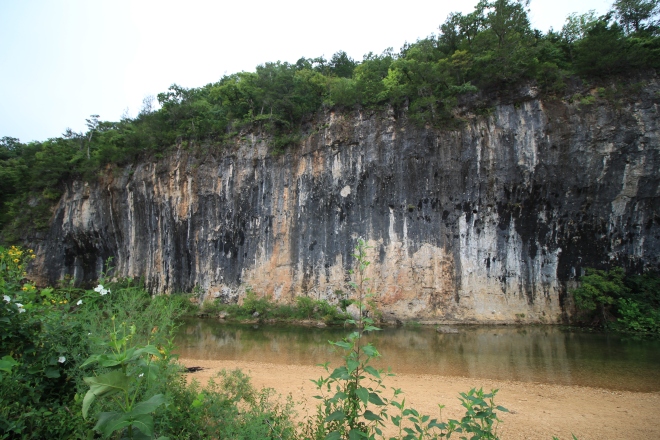 Located south of Salem, north of Eminence on Highway 19, Echo Bluff State Park is less than three hours from St. Louis, a little over two hours from Springfield, easily accessible from Highway 60 and Interstate 44. For us Kansas Citians, it is a jaunt (five and a half hours) but worth every minute!

The towering limestone bluff along Sinking Creek, that is the parks namesake, is absolutely impressive but it is Echo Bluffs State Park lodging options that will draw all of you to the park. Campers are going to find a pretty impressive campground that offers 62 sites; 43 of those are full service with water, electric and sewer!  While shade in the campground is sparse right now, you will find level concrete pads, large modern shower facilities, bathrooms, and a dump station all easily accessible. Campers looking for something a little less populated and rustic will find 12 primitive walk-in camping sites hidden among the tall mature trees.

For the non-campers in your life who like to tag along on your adventures, Echo Bluff has lodging for them as well. The Betty Lea Lodge (named after Missouri Governor Nixon’s mother) has 16 standard rooms and 4 suites for rent as well as a gift shop and market, a full service restaurant, a great room and a lodge deck making this lodge the center-point of the park. For families who need a little more space than a hotel room, Echo Bluff State Park has modern 2 and 4 bedroom cabins as well as 4 stacked duplex cabins that can be rented individually or for extra large groups.  While the water at the campground may not be on all year long, the lodging at Echo Bluff is available year round so guest can enjoy the Ozarks through the spring bloom, the summer sunshine, the fall leaves and even the frozen winter.

Long before construction began on this new park the property was home to generations of campers and Echo Bluff State Park has honored some of that history. From 1929 to 1986 the land was home to a youth summer camp called Camp Zoe where youth from St. Louis spent several weeks each summer enjoying the great outdoors. Missouri State Parks has left the original Camp Zoe Lodge in place as well as the original horse barn. They have also named one of the hiking trails after a former staff member, Painter. On the contrary, from 1986 to 2014 this property was home to a different Camp Zoe but still an important piece of this lands history. During this time the land was owned by a Grateful Dead tribute band frontman who held music festivals commonly known as Schwagstock. In 2014 he was arrested and subsequently imprisoned for “maintaining a drug environment” after the government raided and subsequently seized the property.  Missouri State Park acquired the property  through auction. In talking to locals during our visit, this more recent colorful chapter lingers and lives in hushed whispers. 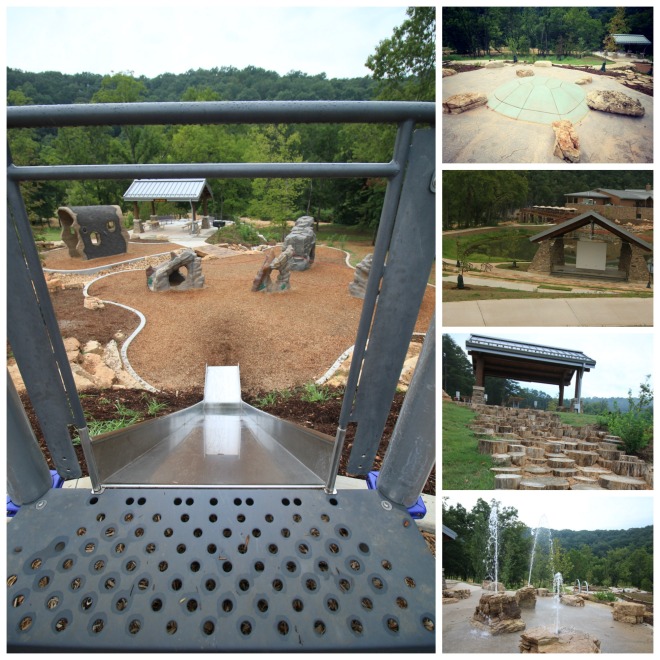 The park has a day use area that will keep either the leisure traveler or the experienced outdoorsman busy. Sinking Creek runs throughout the park and brings swimming, wading, floating, and fishing. Wayne spent several hours in the rain fishing and was happy to have caught five or so small mouth and rock bass.  Children of all ages will enjoy a splash park as well as a playground. There were no activities scheduled during our visit but the park also has a beautiful amphitheater. 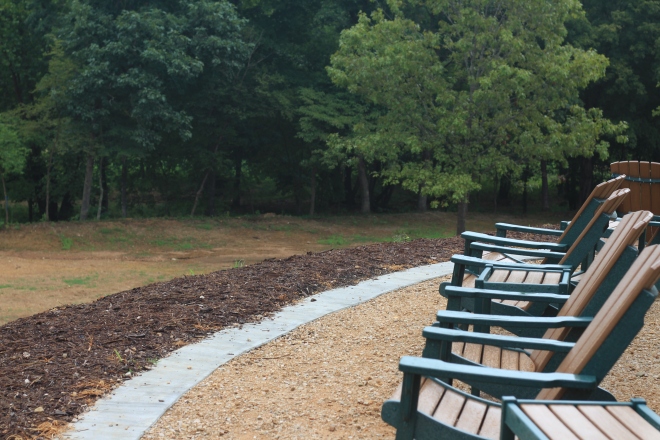 If bigger water activities are your desire, Sinking Creek is a tributary to the Current River and is near the intersection with another river, The Jacks Fork. Within a few short miles of the state park you will find several outfitters to help you spend a day floating down the Ozark Scenic Riverway. One outfitter, Carr’s Canoe Rental, even made daily visits to Echo Bluff to provide round trip service, at no additional cost, to guest.

We spent a four day weekend at Echo Bluff State Park celebrating the end of summer and the start of another school year. This trip we traveled with ten of us: with Angie’s Aunt/Uncle, Mom and Step Dad with us.  Coincidentally, shortly after we arrived the first night, our campground neighbors pulled in and to our surprise it was Chuck and Dana from Kansas City who we also camped next door to at Wallace State Park back in June.  The “old folks” as they called themselves stayed in the Betty Lea Lodge. We stayed in the full service campground, which is walking distance from The Betty Lea across the Wheeler Bridge. We visited the park three weeks after they opened. 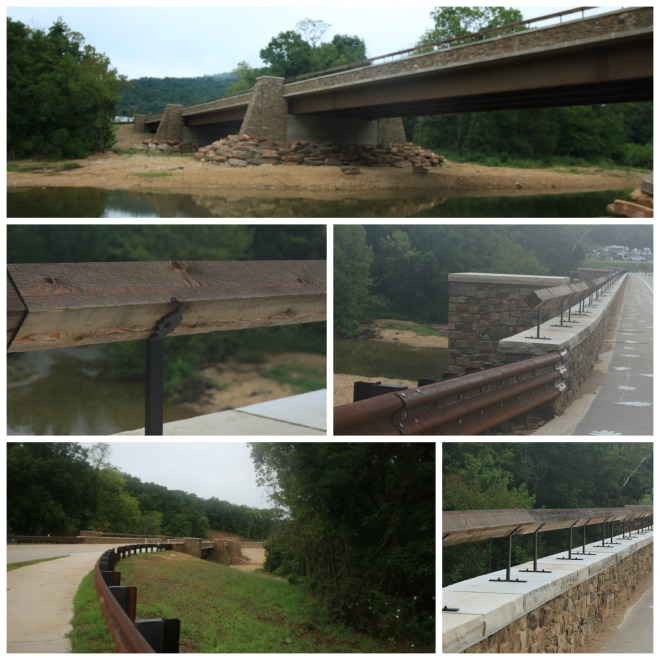 On our second day at the state park, we enjoyed a float trip down the Current River. We used Eminence Canoes Cottages and Camp as our outfitters for the day. Their staff were very friendly and helpful getting us on and off the river. This was the first time we had ever used plastic canoes and we learned they are smaller and less balanced than our favorite aluminum canoes. Unfortunately, some lessons are learned the hard way and we learned just how “tippy” the canoe was when ours flipped over on us and quickly filled our canoe full of cold water!  On a related note: If you find a Sony Cybershot at the bottom of the Current River upstream from Twin Rivers give us a shout out because ours went to the bottom when we tipped.

We barely made it back to the park by the time the rain clouds opened. The rest of the weekend was wet. Wayne and I got up super early Saturday morning to roam the park in between downpours. I am so glad we did because it was the last moments of non-rain we had. We decided to take a road trip to enjoy the local area as a way of dealing with the rain. We visited Current River State Park (almost across the highway from Echo Bluff). Wayne brought along his fishing pole and within three cast caught a beast of a large mouth. I think he would have stayed there all day if we would have let him. Instead, we had him drive us over to Johnson Shutins, Elephant Rock State Park, and The Battle of Pilot Knob State Historic Site. It was a long day of driving but everyone had a really fun time visiting some of our favorite places.

After our long road trip and the fact that it was still raining, we opted to forgo our campfire meal and eat dinner at the full service restaurant at The Betty Lea called Creekside Grill. The restaurant is actually pretty small so they sat us and two other large groups in some conference space used as overflow seating. Our experience with Creekside Grill started off pretty rocky. As soon as we were seated, one of the other large group , who were obviously from St. Louis,  ramped up their conversation about who to root for this football season now that they are without a team. The gist of this conversation was that they had two choices; the Arizona Cardinals (formerly from St. Louis) or the Kansas City Chiefs. Well let’s just say it was not a pleasant experience when foul language coupled with bashing of our side of the state welcomed us as we were settling into our seats. I did enjoy their looks of horror as my husband introduced ourselves and proudly let them know where we were from. Jerks.

The dinner menu at Creekside Grill is a little upscale: Mushroom Studel, Catfish, Buffalo Meatloaf, Smoked Chicken, BBQ Ribs to name a few of the option available. Prices run between $15 to $20. (The kids meals were $5.00.) We started with slow service; the table seated after us got their drinks and salads before we even got our drinks. Overall, the food was consumed but it was not anything so fantastic that I have to tell you about it nor am I rushing back to have something again. 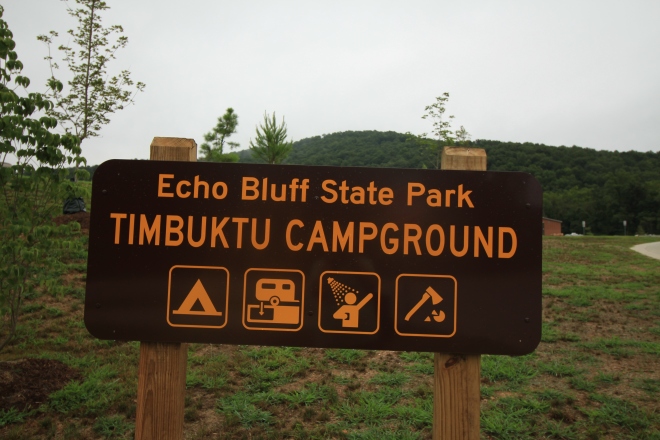 On our last morning there, the “old folks” invited us to breakfast at the Creekside Grill so we would not have to make a mess before tearing down. Our experience with them the night before was so mediocre I thought it was a good thing to give them a second try. As we approached the restaurant we were not greeted, we watched staff clear and set up tables without once speaking to us. There was no sign telling us to “seat ourselves” so we just stood watching the waitresses work until we finally asked if we could be seated.

The buffet consisted of coffee, orange juice, fresh fruit, muffins, biscuits, gravy, sausage, bacon, scrambled eggs, and potatoes. When we arrived, it was obvious the buffet table was wrecked: food spilled all over and the food supply was depleted. The waitresses never once showed any action to attend to the buffet table until we specifically asked. Unfortunately, the quality of food was not any better. The coffee was weak, the biscuits were hard and overcooked, and I am sure the eggs were powdered eggs made to serve the masses. I have had better quality food at hotels that offer a free breakfast with your stay and this was a $9.99 per person breakfast. I think I expected more from this Lodge who is clearly trying to portray a more upscale experience. I do believe the workforce in the restaurant are young and inexperienced. I just hope someone with experience steps up and provides some training so the quality of service can match the experience before our next visit. 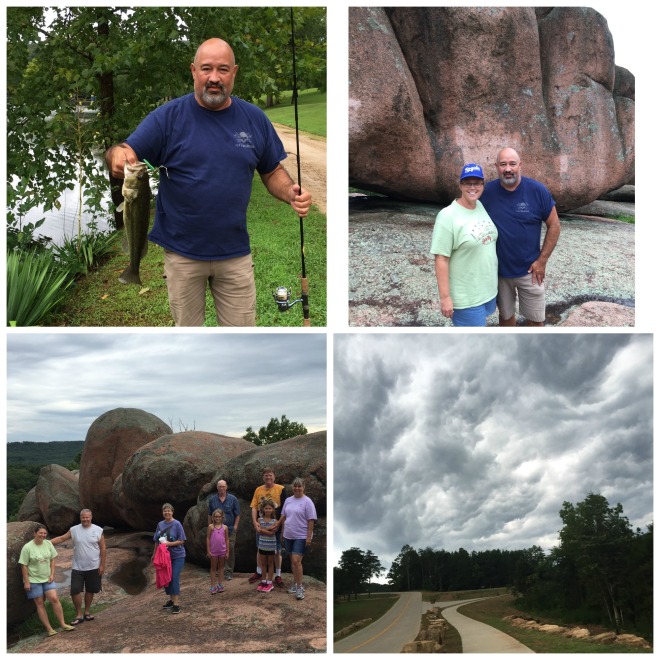 While I would say we were less than impressed with the restaurant, we were very impressed with the overall park. From the impressive limestone bluff to the natural iron guard rails that run throughout the park,  from the beautiful Wheeler Bridge (named after the Governor’s Father-in-Law) to The Betty Lea Lodge, from the splash park to the original Camp Zoe Lodge the park is beautiful! It is a place we will plan to return to time and again.

Eastern Cultures consider a double rainbow to be a symbol of transformation; the inner ring representing material world and the outer ring spiritual. On our last night in the park we were blessed with a double rainbow. I think Missouri State Parks has transformed this piece of land from something questionable (Schwagfest) back to a park where all are welcome and new generations are invited to explore the great outdoors.