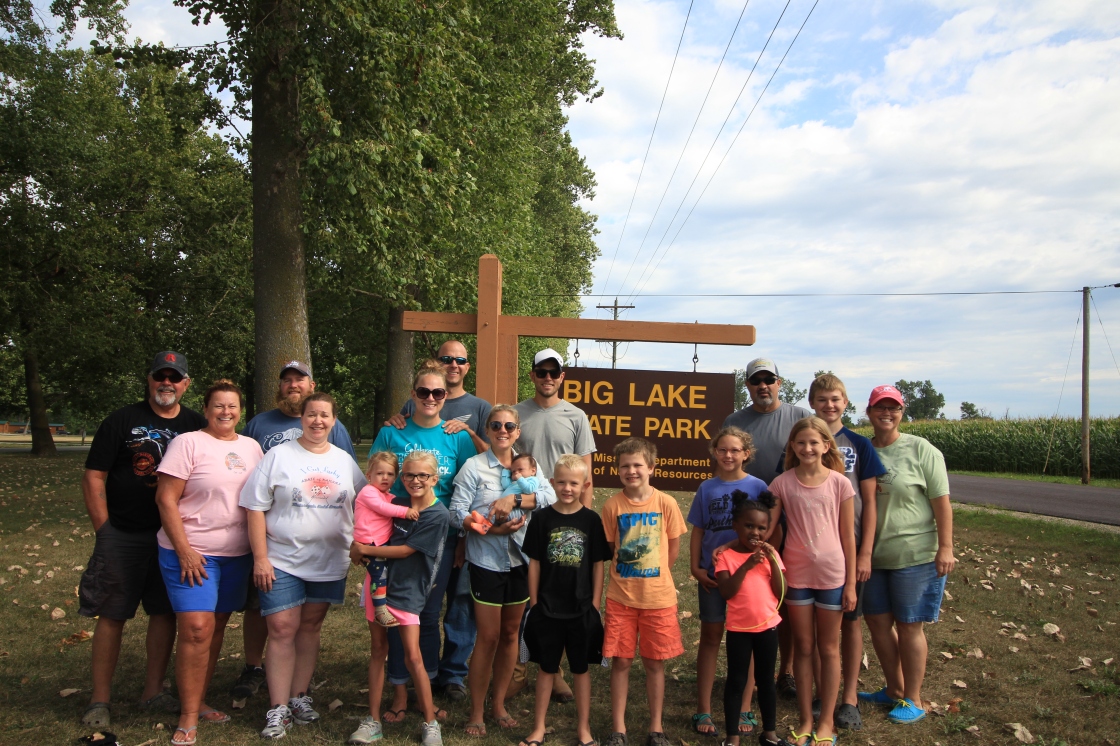 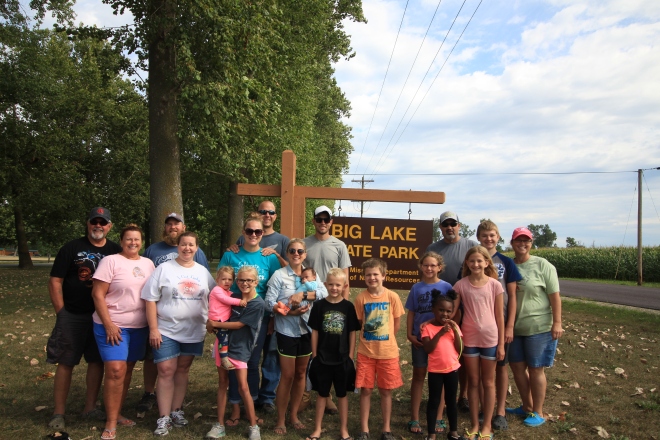 Campers believe that camping is magical. Noncampers might disagree; but we aren’t really hanging out with noncampers so their opinions do not really matter to us. What makes camping to a camper so magical? I don’t really know the formula. I would suggest it differs from one person to the next. Maybe it differs from one camping trip to the next. I think the magical formula has to do with the company, the setting, the activities, or maybe even the weather. While I can’t pinpoint what exactly makes a camping trip magical, I can recognize a magical trip. It is one you walk away from with a big smile on your face. It is one that reaffirms your love for camping.

The weekend we spent at Big Lake State Park last August was one of the most magical camping trips. I think each of us walked away feeling like we had just had one of our favorite camping trips of the year.  Even now, in the dead cold of winter, my heart is warm just thinking about our time there. I am going to try and breakdown the component of this magical weekend. 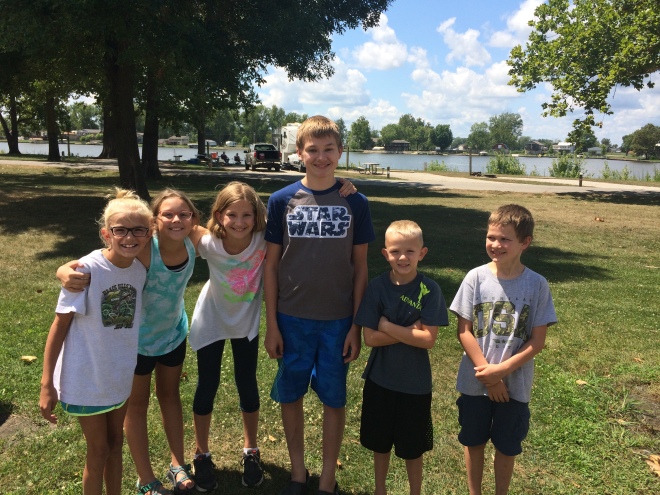 Meeghan organized this camping trip in order to bring back together a trio of friends. Several years ago, one of our really good friends (Jen and Glen) moved to the East Coast. Jen and Glen send their children back to the Midwest for a month each summer to stay connected to extended family. Meeghan came up with an idea to camp with the extended family when they had the kids so we all could reconnect; especially giving our children the opportunity to spend time together. Unbeknownst to us Jen and Glen had to make a unexpected trip back to the Midwest and they were able to surprise their children and us with a face to face visit! 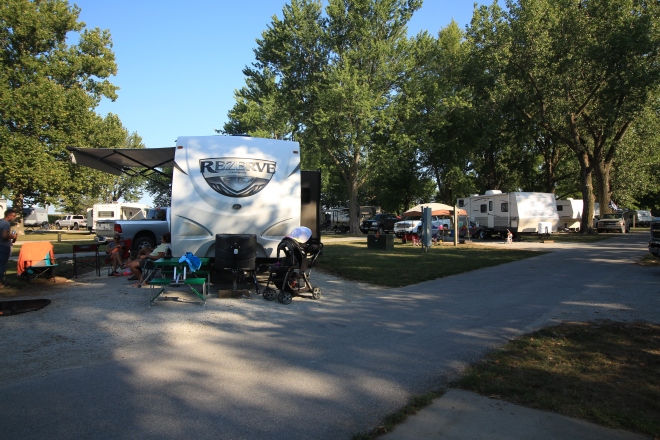 In addition to the three families, we also had a few others decide to join us. In the end we had five families with around 23 people camping at Big Lake State Park.

The Short Chic and I got the last second chance to go up to Big Lake a day early. We enjoyed a mommy/daughter evening in the camper and enjoyed waking up leisurely at the campground. The Short Chic made new friends while I worked from home that Friday morning. It was not until after lunch that I realized Jen and Glen’s extended family arrived a day early like us. Any time you can get an extra day at the campground is a good day. Spending the afternoon with friends is a great day!

Big Lake State Park is in the far northwest corner of the state of Missouri near the Nebraska/Iowa/Kansas border. It is 87 miles north of our home in Kansas City and took us under one hour and thirty minutes to arrive. 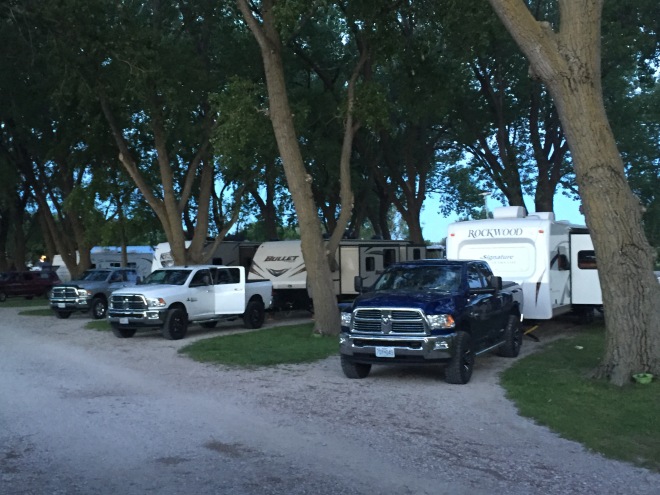 Big Lake is the largest remaining oxbow lake in the state of Missouri. An oxbow lake is one that is created when a river ebbs and flows and cuts itself off and fills in with water. It is suspected that Big Lake was formed in the 1800’s and was documented in the Lewis and Clark expedition.  Recently the park was closed from 2011 to 2014 as Big Lake State Park was closed due to flooding.

There are only 76 camping sites at Big Lake, making it a fairly small park. The sites closest to the lake are basic and the rest is electric sites only. The loops are narrow. The weekend we were there it seemed as if there were a lot of group campers enjoying the weekend. This is a campground that would be perfect if you have campers and noncampers as Big Lake also has eight sleep cabins available for rent.

There are showers on both ends of the campground. Most of the bathrooms are shower/bathroom combinations and then they have a few single stall bathrooms. All weekend it felt there was a line to use the bathrooms, so i think unfortunately, they might have missed the mark on the number of bathrooms needed.

The lake is the biggest draw at Big Lake State Park. The park rents canoes and kayak’s at a rate of $20 a day which makes it easy to for visitors to get out and enjoy the water. Of course, you can also bring your own water toys to play with. 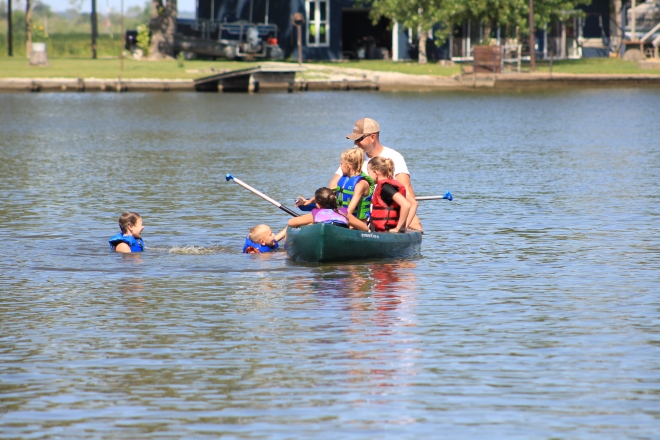 There are areas to swim in the lake but if lake swimming is not your thing, there is also a public swimming pool at Big Lake State Park.

Bird watching is a nice thing to do at this park. We have spotted our share of Bald Eagles. 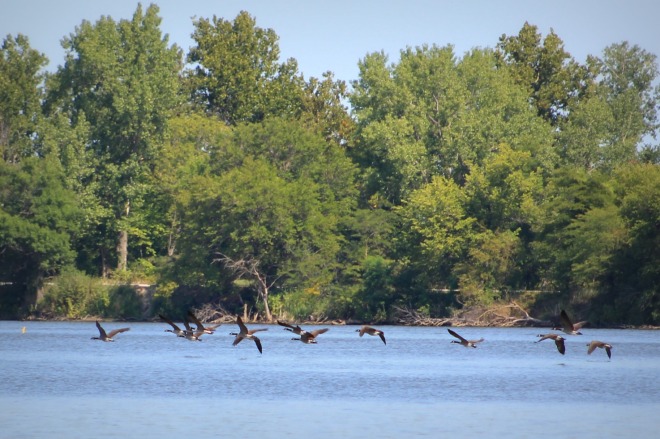 Big Lake also has a beautiful night sky. During the weekend we camped here there was a meteorite shower occurring. Of course, we did not know anything about the shower until our campground neighbors so rudely asked us to shut off our outside lights so they could watch the meteorite shower. Funny, we sat out under that dark sky and saw numerous meteorites that night and I am not sure our neighbors saw any.

Hiking is a standard activity we enjoy participating in at state parks. However, there is no hiking at Big Lake State Park. In the place of hiking, bicycling became an important part of this weekend. Specifically, an epic bike race between Meeghan and Jeremy. Through the course of the summer, Meeghan had been riding on an old green Huffy she picked up for $30 at an auction. Way back in May on our first bike ride of the summer, Wayne aired up Meeghan’s nearly flat tires. However, we soon found out that fully aired, the tires rubbed against the bike frame. The gears would not shift so her 21 speed was limited to pretty much two gears: peddling or not peddling.  We all knew Meeghan needed a new bike. But Jeremy was less than convinced. So he struck a deal with Meeghan, a head on head bike ride and if Meeghan could beat Jeremy then a new bike she could have. Jeremy would take the green Huffy and Meeghan borrowed my bike. 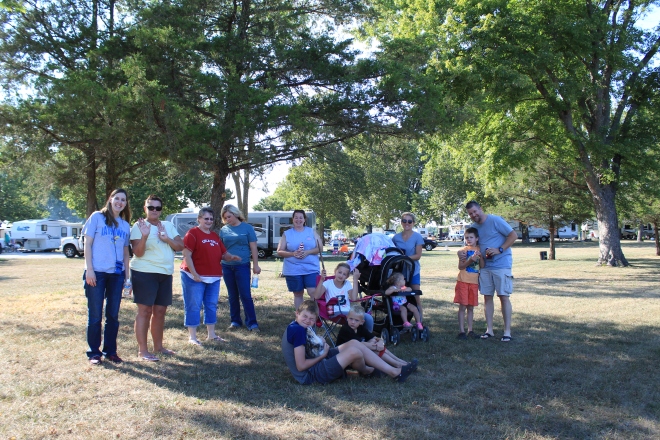 Meeghan and Jeremy took off on a three mile race. We all gathered to watch the dramatic conclusion. I will say, the race was much tighter than I expected it to be. I know Jeremy pretty well and he was not going down without a fight. But, I also know my bike and just felt like even with a novice on it, my bike alone should have smoked that green Huffy. In front of all his family and friends, we watched Jeremy fall to Meeghan in the home stretch of the race.

Other activities we participated in while we were there include: the playground, an outdoor movie, and a giant water balloon fight.

August in Missouri should be melt your face off hot. It is not uncommon to experience triple digit temperatures. However; we had some of best weather of the summer. Sure it was super warm during the day but a cool dip in the lake and then the pool took that edge off. The evenings cooled off and were perfect for sitting around a campfire or watching an outdoor movie. 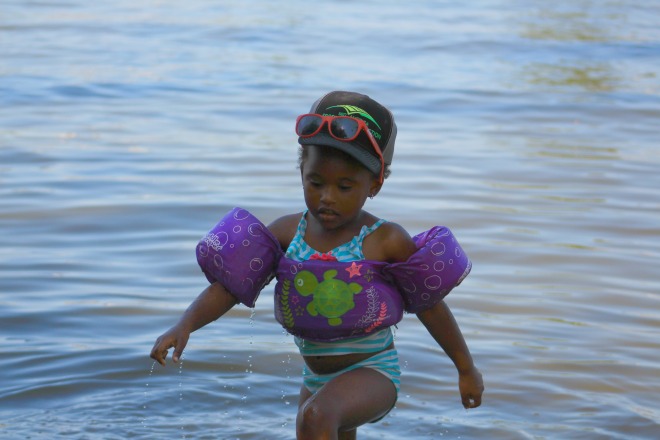 I hope for a second you get a glimpse of how magical this weekend was for us. We left there planning to make it a yearly experience. Want to see more of Big Lake? Check out our short video.