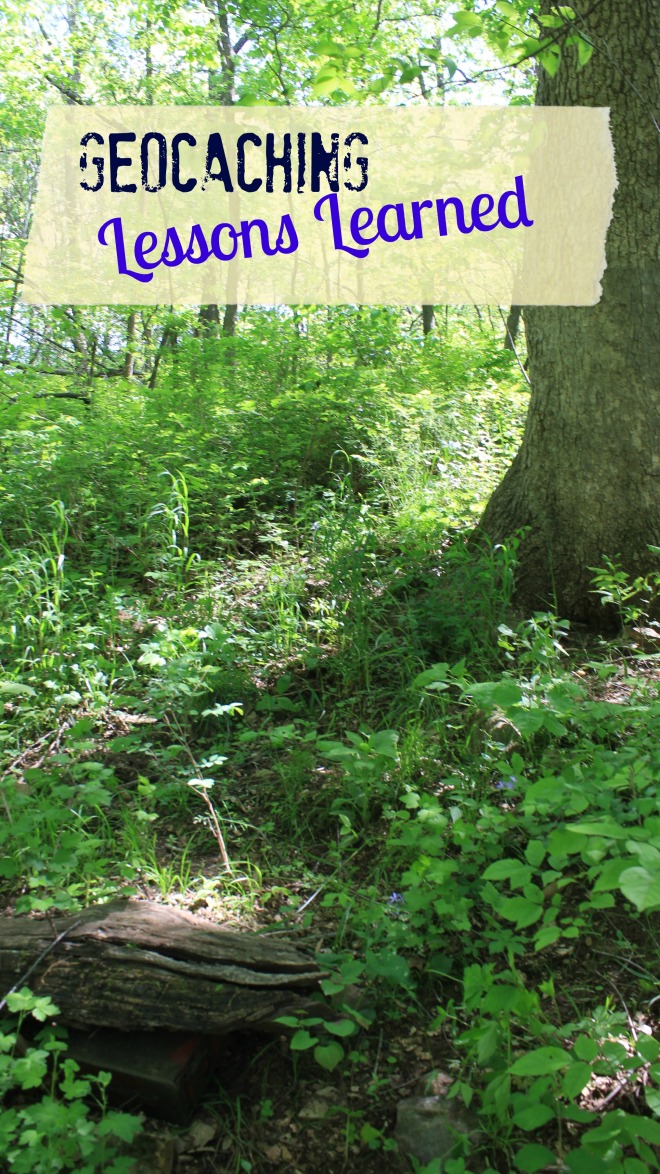 We Went Geocaching And I Lost My Cool

The thought of searching for and finding hidden treasure is so exciting; it speaks to the adventurer and maybe even pirate in all of us. A coworker of mine loves Geocaching and her enthusiasm for it made me decide I wanted to try it as well. In my head, I thought my family would love it.

I downloaded the app Geocaching App by Ground Speak (from my research I learned it is the best app to use) onto my smartphone and thought I was ready. At first glance I was pretty amazed at the number of geocaches around me. They appear to be everywhere!

During our last weekend camping trip, I checked the app and found several geocaches close to where we were camping. One of them was only .6 miles away. (I did not realize at the time that was the distance from point A to point B not the distance it would require to find the cache!)  The entire camping party hopped on board and off we went. I should pre-warn you: this is not a happy cheery post about how easy Geocaching was for us. This is the kind of post we will be retelling around the campfire forever.  I can hear it now, “Remember that time Mom lost her nuts while Geocaching?”

We sure had not gotten far when the shorter people in our group started complaining and wanting to know how far until we found it.  I noticed the app kept counting down: .6 miles became .4 miles and then it went to feet. I thought it was a great idea to keep them motivated by telling them the numbers as they dropped. (What I had no idea was the numbers  went up and down frequently as the trail took us closer and further from the cache!)

Wayne took the phone from me and actually figured out how to read the directions. I thought we were making great progress so I did not hesitate to take the phone back and continued to read and direct us myself.  At one point we got within 250 feet of the cache. I was so excited as that was the closest we had been but a little disappointed too because I knew that meant to find it we were going to have to leave the trail and hit the woods.  Wayne then speaks up and tells me we were within 100 feet some time back when he was directing us.

I felt my blood pressure jump to the sky! How could we have been within 100 feet and he not say a thing. He reminded me that he ask if there was any secondary paths. How was I to know that was code for we are super close? Instead we walked a good half mile on and now faced with the notion of backtracking our steps.  Unlike myself, my dear husband has no expectations that things will go smoothly when you start something new. He is always reminding us that it is suppose to be an adventure and adventures often come with challenges.

Wayne and I began retracing our steps, me yelling the entire way. We never got within 100 feet of the cache but it was within 180 feet. We did have to leave the trail and had to navigate gooseberry branches (they are thorny), a steep hill, rocks, and a dried up creek. The app kept telling us we were close but we were just not seeing it.

Then I stepped in another direction and holy smacks there it was; cleverly hidden, obvious once you saw it, just hanging out waiting for us. I felt triumphant like I had found something valuable!  We did not bring and baubles to trade so we just logged in our find in the log book (even gave credit to those back at camp).  We took photos and then re-hid the cache for the next person. Then Wayne and I gave each other a high five. Apologies for short tempers and bad communication were given freely on the way back to camp.

I learned a few lessons from our first near traumatizing Geocaching outing. First, the distance is misleading. We set out on this trip thinking the Geocache was .6 miles away. That .6 might be as a crow flies, meaning a straight line from Point A to Point B. The truth, we walked over 3 miles.

I also learned that when you get so close (under 30 feet) of the Geocache you should actually put the phone away and just use your senses to find the hidden prize.  The final lesson I learned is that not every time you seek a Geocache you will find it on the first try. It is okay to walk away not having found it.

With a success under our belt and having learned a few lessons, we decided to try again. We selected one that was lower on the difficulty and terrain scales.  The kids were with us on this hunt. Again, the short ones got bored easily.  I think if I would have been better about putting the app away when we were within thirty feet and just encouraged them to look, we would have had better success. The Boy found it and proclaimed it super easy.

Here is the deal; we got a rough start. In the end, we enjoyed it enough that we will not be scared to try it again. I think we will stick with some easy ones to build up our confidence as well as experience. Then we will move into tackling some harder ones!